Adzaay (or Adɮāλ) is an a priori, possibly non-terrestrial language whose phonology, morphology, grammar, and really whose entire weltanschauung is inextricably tied to sets of three. Their number system is nonal (3×3); there are three vowels; there are three of each type of consonant; there are three noun classes (or “genders,” but that word really isn’t useful here); there are even three finite grammatical moods.

Since [ɑdˈɮɑːtɬʼ] doesn't really roll off the tongue of the average native speaker of most European languages, the alternative name “Ox-Yew” (or the Language of the Ox-Yew People) is derived from a mistranslation of what early researchers believed the people to be called; in reality, the people of a nearby village who directed them where to find the main Ox-Yew village had said something more along the lines of: “Why would you want to go there? It's just cows and trees.”

Diphthongs are always falling, but if a diphthong starting with /i/ or /u/ appears at the beginning of a word (i.e. with no onset), it is realized as a glide ([j] or [w], respectively).

Because of the limited range of vowels, a vowel chart is almost wasted for Adzaay, but here you go:

The diphthongs do not vary other than by length: 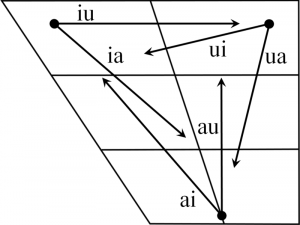 The number of consonant clusters which can occur intervocalically between syllables with non-primary stress is dramatically reduced. Somehow. Probably. I think. Also, stress is primarily dactylic, somehow, probably, I think.

Adzaay has three distinct orthographies. There is a native writing system (patent pending...); a “presentational” orthography, which uses some diacritics and some non-standard characters to present the language a little more compactly and with a few slightly more intuitive graphemes; and a “utility” orthography, which uses 24 letters of the standard 26-letter Latin alphabet. (The letters O and E are not used.)

Articles, Demonstratives, and other Determiners

The number system of Ox-Yew is nonal (base 9) which developed from an earlier ternary (or trinary) system.

Everything below this sentence is a lie.

Adzaay has several cases which regulate the roles various words play in a sentence.

The absolutive case is used for the subjects of intransitive verbs.

Ergative is used with the subjects of transitive verbs when there is a direct object present.

The use of the dative in Adzaay is slightly more restrictive than it may be in other languages. It specifically invokes the meaning of ‘to’ or ‘towards’.

Many languages have an “ablative” case, though it rarely means the same thing from one language to another. In Adzaay, the ablative is the exact inverse of the dative, invoking the meaning of ‘out of’ or ‘from’.

The genitive deals with possession and relation. There is a bit of overlap with the ablative.

The oblique isn't so much a case as an anti-case: This is the “Dictionary Form” of Adzaay nouns, and is not inflected at all. It is mainly used with adpositions, or for mentioning things in a list.

There are only three noun classes in Adzaay, so one might be tempted to call them “genders,” but that term really doesn't work well here, considering that all of the human genders which usually serve as examples of the various grammatical genders all fall into a single noun class. Adzaay nouns are divided into Animate, Inanimate, and Abstract classes.

Animate nouns are quite literally comprised of things which are alive. This includes, but is not limited to men, women, children, dogs, cows, grass, trees, moss, cauliflower, and caterpillars. Some dynamic nouns may be considered animate even if they are not alive in the traditional sense, such as fire, running water, wind, or weather.

*Note to self: What about body parts and plant parts, like heart, arm, brain, trunk, and leaf?

Don't delete my stuff just because I'm lazy and haven't filled it out yet, you jerk!

The typology of Adzaay is predominantly SOV or verb-final. Marked order is OSV. A morphological particle is inserted between the subject and the direct object which is ostensibly a case suffix combined with a case prefix; a different particle is used in marked order.

Adzaay alignment is tripartite, so nouns and pronouns are differentiated for subject, object, and agentive roles by use of case affixes and/or particles.

Adzaay is predominantly head-final, and this is reflected in many of its more granular alignments.

A typical noun phrase is structured in the following order:

As mentioned in Typology, Adzaay is a verb-final language, and as such, adverbs always immediately precede the verb. Verbs inflect for person, number, polarity, voice, mood, tense, and aspect.

Key vocabulary can be found here.